Forts and Fortresses in Riva del Garda, the city was a military outpost from the middle ages to the venetian domination 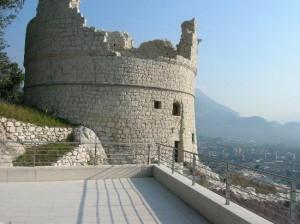 In a dominant position over the city stands the Rocchetta, on top of which, thanks to the extensive view it offers, in 1400 the Venetians built the Bastione, a structure recently the subject of a major restoration campaign to return it to its former splendour. It was subjected to numerous modifications and more than a little damage, first by the Bishop of Trento, who ordered the removal of the Lion of St Mark, the symbol of the city, and then the French general Vendome, before it was taken by Napoleon’s troops.
The memory of Austrian presence in the area also remains strong, in the form of numerous forts.
Facing the lake is the famous Rocca, originally built during the Middle Ages but then completely renovated by the Austrians in the mid-nineteenth century. It enjoys an especially privileged location, from which all of the ships entering and exiting the port can be easily viewed.
It was a sought-after control point, appropriated by all of the powers that dominated Riva del Garda and each carried out modifications to make it better suited to the times and the needs of the moment, as well as to repair damage caused by the numerous attacks that it endured (Napoleon included, at the turn of the century between 1700 and 1800).
It is partially open to the public, hosting the Museo Civico and a picture gallery with works dating between 1500 and 1900, as well as numerous exhibitions of contemporary art.