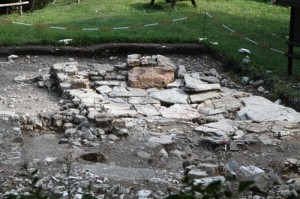 The ruins of numerous buildings, still preserved, have allowed scholars to reconstruct the history of this archaeological site, starting with the Roman age, when a sanctuary stood here, up to the Middle Ages, when the town was equipped with well-designed fortifications for the protection of inhabitants. For that matter, the valley below was highly trafficked and it was from up high on Monte S. Martino that one could best control the whole area.

The Roman-era sanctuary (3rd-4th century AD), which rose on an earlier cult site built by local populations, was excavated in the last quarter of the twentieth century. The properly religious activity took place within, and to reach this part of the sanctuary one used a flight of steps the remains of which are still preserved today. This religious site was made up of many rooms and has not yet been definitively linked to a specific divinity. Just as interesting is the late antique and medieval phase of the site, characterised by the distribution of a series of private homes on a terrace located a bit downhill from the Roman sanctuary, to which was then added a church dedicated to St Martin, the earliest phase of which dates to the 9th century.